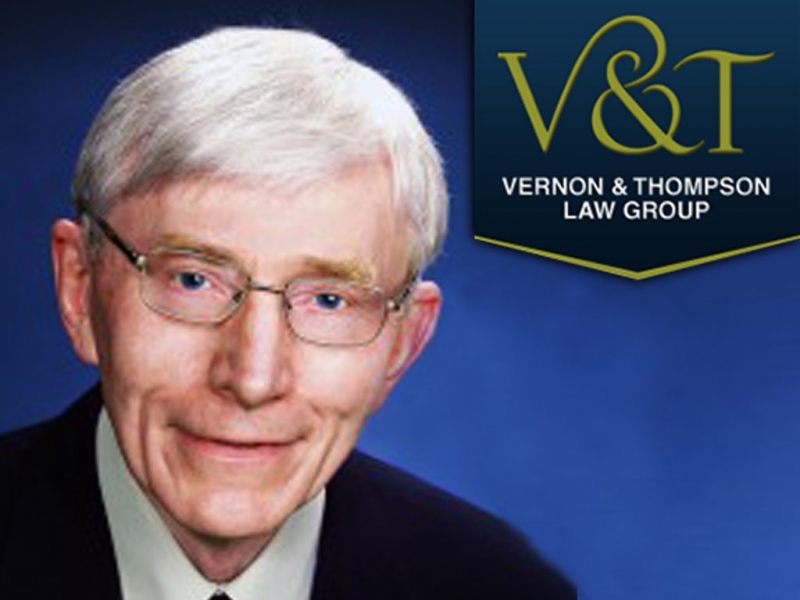 Vernon & Thompson Law Group is an Association of lawyers whose roots in our community date back to the 1930s, and who continue to carry on our tradition of providing quality legal services to our clients in Maple Ridge and Pitt Meadows and other parts of British Columbia. Each lawyer in our group brings their expertise to their preferred area of practice, namely: Alan Thompson – Real Estate and Property Development Laurence Anderson – Wills, Powers of Attorney and Estates Brian Marshall – Personal Injury & Estate Litigation David Riddell – Corporate and Commercial Law, Real Estate and Property Development ABOUT LAURENCE ANDERSON Laurence Anderson obtained his Bachelor of Law degree from the University of British Columbia, Faculty of Law, graduating near the top of his class. Mr. Anderson joined Vernon & Thompson in Maple Ridge in 1970. Although today Laurence practices almost exclusively in the areas of Wills, powers of attorney, representation agreements, estates and probate, he brings to his clients a wide range of experience in other legal disciplines. During his career, he has practiced (in addition to Wills and Estate work) as a Crown prosecutor and criminal defense lawyer, marital and divorce counsel, real estate and mortgage lawyer, and corporate and business law solicitor. He has previously appeared at all levels of Court in British Columbia (including Provincial Court, Supreme Court and the Court of Appeal) but now limits his practice to solicitor’s work in the field of Wills and Estates. Laurence Anderson has lived in Pitt Meadows since 1970, and is a current member and past president of the Meadow Ridge Rotary Club, a service club whose motto is Service Above Self. Laurence Anderson is also a Director of the Ridge Meadows Education Foundation which supports student activities and education in our School District #42, and a past director of the Meadow Ridge Hospital Foundation. Mr. Anderson has presented seminars to seniors groups and those sponsored by Vancouver Peoples Law School, and to the general public on various areas of the law, most particularly Wills, estate planning, powers of attorney, and probating of estates. In 2013 Laurence Anderson was voted Favourite Lawyer in Maple Ridge & Pitt Meadows by readers of the Maple Ridge Pitt Meadow News in our two communities. ABOUT VERNON & THOMPSON LAW GROUP We are the registered and records offices of over 625 companies and societies, many of whose names will be instantly recognizable as leading businesses and not-for-profit charities in Maple Ridge and Pitt Meadows as well as other communities. Vernon & Thompson Law Group is large enough and experienced enough to handle your legal affairs in our various areas of practice, but at Vernon & Thompson you will never feel like a small fish in a big pond. All our lawyers have many years of experience in their chosen profession. Our support staff are also very experienced in their respective fields and contribute greatly to our success. The roots of our Association began in 1901 when Charles Foster Campbell, who began the practice of law in Manitoba in 1898, moved to British Columbia and began the practice of law in Vancouver. He came to “Haney” in the late 1930’s and set up practice here. David Vernon joined in 1962 followed by Alan Thompson and the firm became Vernon & Thompson in 1969. Laurence Anderson joined the firm in 1970 and Brian Marshall in 1974. In 2001 (exactly 100 years after Charles Campbell left the plains of Manitoba) David Riddell, who began the practice of law in Manchester, England in 1993, moved to British Columbia to practice law in Vancouver, and then came to “Haney” to join our Law Group in 2008. We now have a group of lawyers and dedicated staff numbering 14 in total, carrying out our proud tradition of providing quality legal services to our clients in Maple Ridge, Pitt Meadows and other parts of British Columbia. 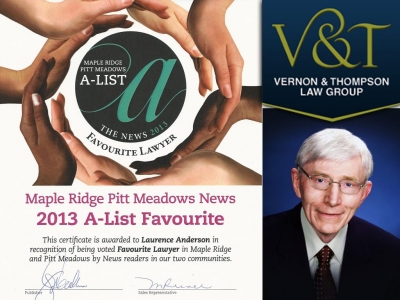